The Cetaceans of The Maldives 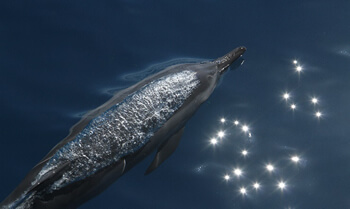 This was our fourth trip and without question the most enjoyable cetacean watching cruise amongst the atolls of the Maldives yet.

The Maldives are an island chain in the Indian Ocean and are home to a vast diversity of stunning marine life including many species of whale and dolphin (cetaceans). This trip ran in April 2016 and was of ten days duration in which time we saw an incredible 2300 individuals of 12 species.
Led by Dr Chas Anderson we cruised the Northern Atolls by day primarily along the shelf edges looking for cetaceans and we weren’t disappointed with incredible encounters with a host of whale and dolphins. The highlights were numerous but perhaps the most memorable was a pod of False Killer Whales that came into the vessel to ‘bow-ride’. 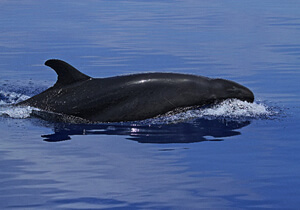 Interestingly false killer whale was first described to science from by a British Paleontologist, Richard Owen from a skull discovered in the Great Fen near Stamford in Lincolnshire; a far cry from the warm tropical seas of the Maldives! On this day around twenty individuals were present and we were able to get even closer views on the small launch! A much wanted cetacean ‘tick’ and an unforgettable experience.

We’d already had great views of the diminutive Dwarf Sperm Whale in mirror calm conditions very close to the vessel. This normally shy species allowed us to get very close and one even breached twice on the starboard side of our ship! 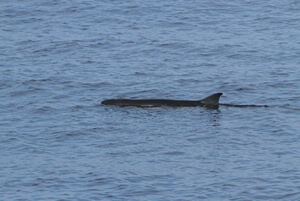 Beaked Whales spend little time at the surface and can dive to great depths and spend up to one hour feeding on deep sea squid.

This means they can be hard to spot and often once they dive they aren’t seen again! No wonder we know little about their biology. There are still beaked whales that are only known from either weathered/washed up skulls and vocalisations picked up on hydrophones. These have yet to be sighted at sea. The other massive highlight was a small pod of fast moving Killer Whales including a huge male which we were able to photograph. These were probably on the look out for their next meal. Not surprisingly further cetacean sightings went a bit quiet for a few hours! 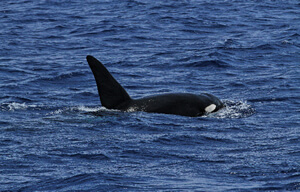 “Stuart is a very experienced and highly technically proficient field ornithologist. He has particular expertise in onshore and offshore bird survey work, but is also a very experienced field ecologist with knowledge of many species groups. Stuart’s other strengths include his ability to strike up easy friendships with landowners and other fieldworkers, his reliability and the presentation of his work, which is excellent. I have Stuart on numerous jobs over the past 10 years, and he has always delivered an excellent service.”

“Micky is a highly skilled field ornithologist and general ecologist, and also has a well-developed interest in upland plant communities. He stands out from many other freelancers due to his analytical approach to survey work and his attention to detail. As a result, where changes or tweaks to survey are needed to ensure a better end result for the client, he can be relied upon to identify them. Micky is also very conscientious, works well as one of a team of surveyors or as a survey co-ordinator, and is very straightforward to deal with.”