Work in the Highlands, Summer 2017

The summer of 2017 was certainly a memorable one in terms of the diversity of work we were involved with but arguably the undoubted highlight was spending a number of wildlife filled weeks in the highlands of Scotland surrounded by stunning coastlines with white sands, turquoise coloured waters, rugged mountains and fabulous wildlife and getting paid for it!

Having been asked to assist in two projects; a post-construction ornithological monitoring programme and ongoing surveys for the Scottish farm payments scheme we considered it for all of half a minute before saying ‘yes’ and not baulking at the ten hour drive from Shropshire or the midge factor!

Over 500 miles from land-locked Shropshire, we based ourselves at the extremely comfortable Kyle of Tongue hostel http://www.tonguehostelandholidaypark.co.uk  against a stunning backdrop of coast and mountains.  Our first surveys were on the Strathy North wind farm in late June. The days were long but rewarding as the site held a number of wildlife jewels including, golden plover, dunlin, greenshank, red and black-throated divers, hen harrier as well as pine marten (the best views I’ve ever had), many red deer, otters and some amazing botany. 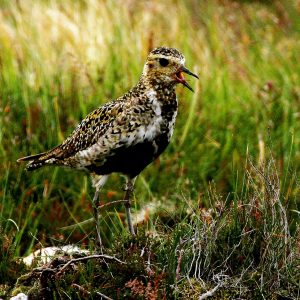 Our survey work was as diverse as the wildlife we were surveying with Vantage Point (VP) surveys; helping to assess flight lines of birds such as raptors, waders and divers across the wind farm, Breeding Bird Surveys (BBS) which allow a measurement of territories and distribution of key species that can be continually monitored for the life of the wind farm and any effects measured. We also were undertaking species specific work that involved surveys and monitoring of the breeding red and black-throated divers that nested alongside the lochs and lochans up to 2km from the wind farm on the huge expanse of blanket bog.

We were working in some incredibly remote locations which either excited you, worried you or both! The constant calling of upland waders filled the empty air and were our only companions. The wind generally kept the midges at bay and I managed to avoid ticks. The going under foot was tough, tiring, sometimes steep and often wet on the bog surface and the weather could change in an instant. One thing was sure, we enjoyed our evening meal and couple of pints even more than normal.

Health and safety is as you would guess, taken very seriously and we were required to use a spot GPS that constantly recorded and reported our position to the office. Micky and I were also able to stay in touch via VHF radios. This was critical when working in such remote and potentially dangerous locations. 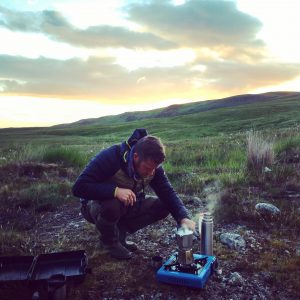 The second part of our work up north was located on the large Hope and Eriboll estates some 40 miles from Strathy. here,  our focus was to collect bird, butterfly and vegetation data for the Single Farm Payments Scheme Environmental Assessment. Both Eriboll and Hope Estates has opted into this scheme and in order to qualify for payments were obliged to undertake ecological surveys.

We spent many consecutive days during July and August walking quite challenging breeding bird and butterfly transects in 500m x 500m squares. Some of the scenery was quite breath taking (so were some of the climbs!). Golden Eagles would often soar above us while golden plover and dunlin were present on the hill tops. A merlin would zoom past and the odd cameo was made by both peregrine and white-tailed eagle. On the shores of Loch Eriboll we encountered a feeding otter that obligingly came ashore with it’s crab quarry not 15 metres from us. 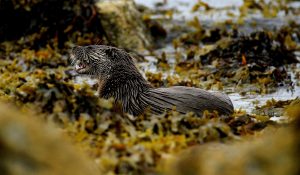 Otter on the shore of Loch Eriboll (S. Thomas).

Watching the otter feed amongst the kelp and wrack certainly made our day and became one of the highlights of the trip.

Butterflies were scarce due in part to the cool weather and also the altitude of some of our squares. A single Scotch Argus was the most notable sighting along on a sunny day on the Eriboll estate. Large Heath was the only other species recorded and in small numbers only.

We were also undertaking vegetation monitoring, using quadrats to help gauge the effects of deer grazing (browsing) on the estates.

The views from the tops of out survey areas were pretty spectacular and made much of the walking worthwhile. Plants such as lesser twayblade and lesser butterfly orchid together with yellow mountain saxifrage were welcome additions to my botanical list. Heath spotted-orchids were extremely common and a trip to Durness produced good numbers of Frog Orchid; a species I’d not seen for a good number of years as they are a declining species in my home county of Shropshire. 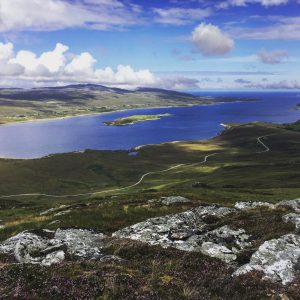 The trips up north would eventually draw to a close but we left with some great memories and experiences.

I’ve been lucky enough to work or travel in some great places from the frozen wilderness of Alaska to the tropical warmth of the Maldives but I firmly believe that the beauty of the Highlands of Scotland are an equal to anywhere I’ve visited. The remoteness of the blanket bogs, majestic unspoilt coastlines to the sheer dramatic mountain backdrops and its pretty obliging flora and fauna make it a must see place on anyone’s list of places to visit. I’m hoping to be back there next year so watch this space………

“Stuart is a very experienced and highly technically proficient field ornithologist. He has particular expertise in onshore and offshore bird survey work, but is also a very experienced field ecologist with knowledge of many species groups. Stuart’s other strengths include his ability to strike up easy friendships with landowners and other fieldworkers, his reliability and the presentation of his work, which is excellent. I have Stuart on numerous jobs over the past 10 years, and he has always delivered an excellent service.”

“Micky is a highly skilled field ornithologist and general ecologist, and also has a well-developed interest in upland plant communities. He stands out from many other freelancers due to his analytical approach to survey work and his attention to detail. As a result, where changes or tweaks to survey are needed to ensure a better end result for the client, he can be relied upon to identify them. Micky is also very conscientious, works well as one of a team of surveyors or as a survey co-ordinator, and is very straightforward to deal with.”